The Fairtrade Foundation is calling on the Government to intensify its efforts to clean up food supply chains and tackle carbon emissions which are ‘hidden’ in imported products.

The call to action comes during Fairtrade Fortnight (22 February – 7 March) in a report published by The Fairtrade Foundation: A climate of crisis: farmers, our food and the fight for justice. The non-profit argues that the Government’s current efforts ‘fall short’ of what is required to protect the interests of small-scale farmers ‘on the frontline of the climate crisis in low-income countries’. 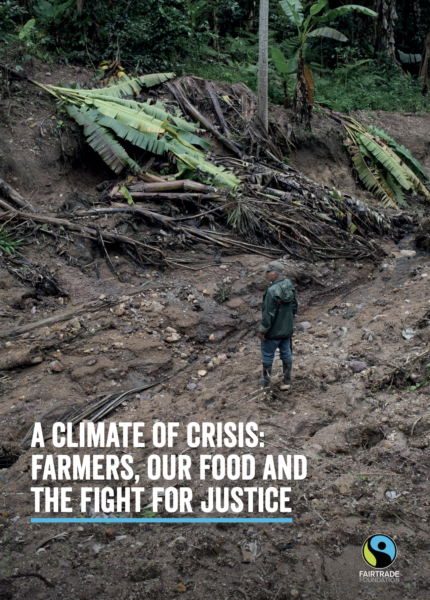 The report warns that extreme weather and shifting meteorological pattens caused by climate change are ‘damaging and undermining’ farmers’ livelihoods, resulting in harm to these agricultural communities which could ‘seriously hinder the UK’s food supplies in the coming decades’.

‘Stronger, faster action’ is urged to reduce emissions in agricultural supply chains in order to support farmers on the ground and safeguard future supplies of imported goods such as cocoa, coffee and bananas, which cannot grow in the UK but are favourites among British consumers.

The Fairtrade Foundation points to the UK’s ‘hidden’ carbon footprint – the greenhouse gas emissions generated in poorer, climate-vulnerable countries for the benefit of the UK consumer market. Figures show that 46% of emissions linked to UK consumption are created overseas, compared to 54% which is produced domestically. Current climate targets only relate to domestic footprint, rather than including offshore emissions, leading the foundation to press Government to ‘stop dumping’ emissions on poorer nations and to be accountable for the UK’s ‘true carbon footprint’.

Richer nations like ours have a historic responsibility for emissions, but farming communities across Asia, Africa and Latin America bear the brunt of the crisis

Mike Gidney, Fairtrade Foundation CEO, comments: “Although the UK is on a welcome path to net zero emissions, if we don’t own up to our hidden emissions, our climate policy will never fully succeed in driving down our true footprint, and we will fail the small-scale producers overseas who grow the food we Brits love to consume. Fairtrade Foundation believes these invisible emissions are, ultimately, the UK’s responsibility: they take a heavy toll on the farmers who keep our shelves stocked and fridges full, and who are disproportionately affected by climate change.

“Not only is the climate emergency threatening the livelihoods of farmers in low-income nations, it’s also jeopardizing the future viability of their crops, meaning supermarket staples like chocolate and coffee could conceivably become luxury items by 2050 if global heating continues apace. We must stop outsourcing the burden of responsibility for tackling UK-driven emissions to other countries, including much poorer ones who have done the least to cause climate change.”

The Fairtrade Foundation is asking the Government to include international aviation and shipping in carbon budgets as well as determine a clear plan reducing emissions. “We believe this would be a powerful way for the UK to take ownership of this issue and it would also show strong leadership to other nations as we prepare to host COP26 in Glasgow,” adds Gidney.

“Richer nations like ours have a historic responsibility for emissions, but farming communities across Asia, Africa and Latin America bear the brunt of the crisis, at a time when they continue to suffer the economic impacts of the COVID-19 pandemic. Alone, they don’t have the resources to withstand climate impacts such as the more frequent and stronger droughts, floods and storms that ruin crops and ruin lives.

“All this seriously undermines farming communities’ efforts to escape poverty – especially if the climate adaptation funding for producer countries remains inadequate – and closer to home, it has serious consequences for our own food security. That’s why, this Fairtrade Fortnight, we are calling for climate justice for farmers.”