The 15% target was set in 2006 by Norway’s incoming centre-left government. At the time, organic accounted for around 4% of farmland in Norway and just 1% of the country’s food and drink market. The ambitious target for organic was part political – a new pro-organic government – and part based on practical precedent (30 administrative regions were already at 10% organic agriculture).

This month the present Conservative Government presented its agricultural statement to Parliament, which includes a proposal to abandon national targets for organic, favouring demand-led stimulation for future growth.

Oikos warns that this would be a “failed policy” and argues that it is essential that the country maintain quantitative targets. In a open letter to the Norwegian newspaper Nationen, Oikos chairwoman Regine Anderson argues that “farmers need longevity and predictability to invest in organic farming” and says that “clear political objectives are a precondition for this”.

Anderson says that the Government would be removing institutional support for organic exactly when consumer demand for organic food is soaring and organic farming practices are being recognized for their vital future environmental role.

She says that “to throw away økomålet (eco target)” would be in contradiction of Government policy, which supports investment in organic production and consumption. “If we are serious that agriculture should be developed in a more sustainable direction, we will need clear political objectives to ensure this happens.” 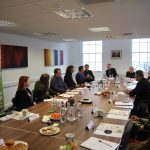 Roundtable: Rewriting the next decade of food
Next Article Legalise nutrition!