From their home offices, kitchens, fields or tractor cabs, a diverse group of organic farmers from across the country will meet with members of Congress and USDA policymakers on Feb. 23 and 24 to brief the new administration on the array of challenges facing the organic sector and how to keep organic agriculture advancing.

Participants of the Organic Trade Association’s first virtual Farmers Advisory Council (FAC) fly-in mirror the diversity of organic — a young African-American former college football star turned organic peanut farmer in Georgia; a Nebraska farmer working with her husband to grow almost a dozen organic and transitioning crops on their farm; a sixth-generation California cattleman and the founder of the largest grass-fed beef company in the U.S.; and a North Carolina dairy farmer who shifted to organic on his 150-year-old family farm to rebuild a healthy ecosystem, to name just four.

The issues they and 20 other organic producers from a dozen states will be discussing are equally expansive: ensuring continuous improvement and accountability in organic standards; increasing funding for organic research; providing organic farmers, businesses and workers with adequate support and protection to help deal with COVID-19; restoring full funding to help organic farmers cover their certification fees; and investing in federal programs to support farmers in successfully transitioning to – and staying in – organic production.

“We have a broad list of issues and policy ‘asks’ to discuss,” said Megan DeBates, Vice President of Government Affairs for the Organic Trade Association. “There are plenty of spaces now where our ‘asks’ can come in – the next farm bill, climate change policy, COVID recovery – so this is a great time to be presenting the organic case.”

“I’m more excited than ever about this year’s FAC fly-in, as more and different types of farmers will have the opportunity to be represented in a virtual format and have their voices heard in D.C.,” said Perry Clutts, co-chairman of FAC and owner of organic dairy farm Pleasantview Farm in central Ohio. Clutts, who in the 1990s converted his great-grandfather’s conventional grain farm to an organic grass-based dairy farm, noted, “It’s important that we reach out to the new administration early. The organic sector continues to be resilient, but we need to move forward on rules, specific to organic production, that will help organic farmers compete fairly.”

“I’m looking forward to discussing how organic is Climate-Smart Agriculture, and how growing organic is key to reinvigorating rural economies,” said Doug Crabtree, co-chairman of the advisory council, organic farmer and co-owner of Vilicus Farm in northern Montana. Crabtree, who with his wife Anna owns and operates the diverse organic dryland crop farm that produces 12 to 15 crops a year, said, “We will share how our organic farms are building healthy soils, capturing carbon in our soils, mitigating the climate crisis, expanding to meet consumer demand, putting new farming on the land, and contributing to our local economies.”

Different stories, the same goal
Fly-in participants Sedrick Rowe, Amy Bruch, Darrell Wood and Sam Dobson have distinctly different organic operations and unique sets of experience, but they all share a common mission – practicing organic agriculture to enrich our soils, foster our ecosystem, and safeguard the food we eat.

Sedrick Rowe is owner and operator of Rowe Organic Farms in southwest Georgia. He is one of only three Georgia farmers successfully growing certified organic peanuts. Rowe is a first-generation farmer, and has expanded his initial ten-acre plot to now 30 acres, growing organic peanuts, sunflowers, and most recently hemp. A former college football star, he has a Master’s degree in Public Health with a published thesis on organic peanuts. When not farming, or being chapter president of the South Georgia Young Farmers Coalition, or member/ambassador of Georgia Organics, or partner of the Black Farmers’ Network, Rowe is working on his doctoral degree in crop, soil and environmental sciences. Recently featured in a New York Times article, Rowe is committed to increasing the number of African-American farmers, and using his network of producers, educators and political contacts to advocate for measures to help more African-Americans enter farming.

Amy Bruch is a sixth-generation farmer in East Central Nebraska and an international agricultural entrepreneur. She and her husband own Cyclone Farms, a family farm that grows a wide diversity of both organic and transition-to-organic crops on their irrigated farm – four different kinds of corn, winter wheat, yellow field peas, oats, alfalfa, canola, sunflowers, and soybeans–plus an array of cover crops. Bruch prioritizes soil health in her farming operations, noting that balancing the soil and building its fertility are the key to long-term farm sustainability and nutrient dense crops. In 2017, Bruch helped found AgriSecure, an organic advisory company, to help farmers expand their organic operations or transition to organic. She’s worked on four continents in various projects to help establish successful organic, sustainable farming operations. Bruch was recently appointed to the National Organic Standards Board.

Darrell Wood is a sixth-generation California cattleman who raises certified organic, grass-fed cattle on his 40,000-acre ranch in Northern California. Wood founded Panorama Meats in 2002 with a group of family ranchers and rangeland conservationists, with the goal to produce a product that is healthy for consumers, humane for the cattle, easy on the environment and that protects the legacy of ranchers for future generations. It’s now comprised of more than 50 family ranches in nine states, and is the largest grass-fed organic beef company in the country. Wood is a nationally recognized conservationist, receiving several awards for his conservation efforts. His ranch uses an integral approach to manage its land, and follows a restoration plan to increase habitat for several threatened plants and animals, including species at risk.

Sam Dobson is the seventh generation of his family to work his dairy farm in North Carolina, but the first to be certified organic. Dobson returned to his dad’s farm after college and vowed to make a change to more environmentally farming practices. A creek neighboring his farm brought the importance of organic agriculture home to Dobson when he visited his boyhood play area and found waters covered with algae and the wildlife vanished. He realized the run-off from the conventional fertilizers his farm was using was destroying the creek and its ecosystem. Transitioning to organic became a priority for him then. Fast forward several years, and Dobson reports his soil biology vastly improved and the creek is filled again with fish, frogs, and butterflies, and attracts wildlife. His dairy cows are rotationally grazed on organic grass; Dobson says they’re the healthiest and most productive they’ve ever been.

Rowe, Bruch, Wood and Dobson, along with produce farmers from Oregon and California; legume and grains farmers from Montana; a wheat grower from Kansas; a grape grower, an almond grower and a poultry producer from California; a diversified crop and livestock farmer from Washington; and dairy farmers from New England, the Mid-Atlantic and the Midwest, will educate the new administration and Congressional members on the unique needs of organic, the importance of organic to U.S. agriculture and our communities, and will amplify priorities identified by FAC.

FAC facts
The Organic Trade Association’s Farmers Advisory Council is one of the largest coalitions in the U.S. of organic farmers and organic farming organizations, representing over 8,000 livestock, poultry, grain and specialty crop producers. It was formed in 2013 to create a stronger voice for organic farmers within the association. 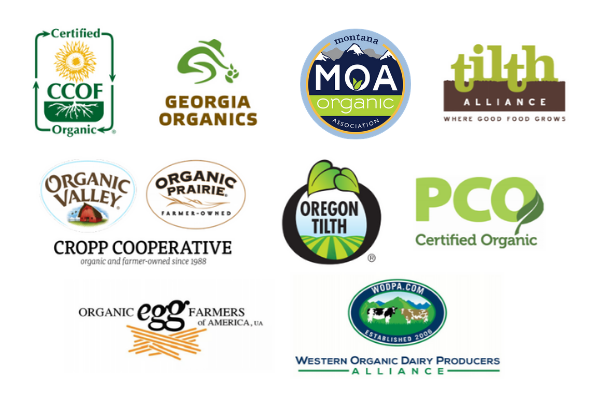 FAC provides the Organic Trade Association Board of Directors and staff with input from small- and medium-sized organic farmers, ranchers, and growers on matters pertinent to the advancement of organic agriculture. It gives organic farmers a voice to directly influence the Organic Trade Association’s policies, and enables the trade association to better represent the diversity of organic producers in its policy and advocacy.

“Our Farmers Advisory Council has been critical in our advocacy efforts in Washington,” said Organic Trade Association CEO and Executive Director Laura Batcha. “This year’s fly-in participants show the diversity and the promise of organic, and will bring the organic voice to D.C. in the early days of the new administration.”

Beyond Meat Expands Retail Distribution To 5,000 U.S. Outlets & At Thousands Of Locations Across Europe

Antibiotic use by SA-certified livestock farmers below national average

Natracare lobbies for ‘truth in labelling’ with Californian non-profit